Messages channeled from higher planes to help you in the here and now.

Clairvoyants use extra-sensory perception, or "second sight," to see into the future and communicate with other worlds. Some psychics see visions, some hear voices, and others intuitively feel the answers. Many psychics use the gift of clairvoyance to channel guidance from angels, spirit guides, or even relatives who have passed.

Clairvoyants interpret visions and can perceive past events (retrocognition), or future events (precognition) to obtain answers to your pressing concerns, such as money, career, family, pet behavior, and romantic prospects. Insight into past events can uncover the root cause of persistent problems. Clairvoyants do not pinpoint a specific vision with movie-like playback clarity. Instead, they channel visions and impressions while in a trance-like state. Your MostGifted clairvoyant will then help you interpret the significance and meaning of these visions.

How Does It Work?

Clairvoyance is not mind reading. "Clair-voyance" is literally "clear-seeing" — an ability to perceive beyond the five senses, with an understanding of energy and vibrational patterns.

String theory holds that the building blocks of matter (electrons, protons, neutrons, quarks, etc.) are one-dimensional oscillating lines. The frequency at which these bands of energy resonate determines their physical form. How they interact with each other and the vibrational level upon which they operate determines how we perceive them. Objects with a relatively slow vibration rate appear more solid and anchored in the physical world. Things of a higher vibrational level are more ethereal, elusive, and often invisible. For example, differing temperatures trigger a change in the vibration level of water, turning it to solid (ice) or ether (vapor).

Everything we see has a vibration rate that fits in the color spectrum visible to the human eye — red being the lowest, and indigo the highest. But beyond this lies the realm of clairvoyance.

Of the great variety of things that a clairvoyant person may see, spirits are perhaps the most publicized. They are, by their very nature, without physical form and therefore existing on a higher frequency than we are. Clairvoyants may also perceive events in the past, present, or future. Visions or foreknowledge of events is often of a tragic nature because negative events resonate at lower vibrational levels, making them much easier to tune into. Positive actions are of a higher, more subtle frequency.

Clairvoyants employ various methods to facilitate visions. The stereotypical crystal ball allows the clairvoyant to relax his or her eyes and enter into a light state of meditation. Some may use a bowl filled with black ink, water with crystals at the bottom, tarot cards, runes, or other divination tools. A clairvoyant's insight can manifest in a physical or non-physical mode.

Physical sight means that an image appears in usual surroundings, no matter how incongruous it might be. For example, in the movie The Sixth Sense, a boy saw the spirits of dead people appearing as solid and as real as living people. Have you ever been puzzled by movement you saw from the corner of your eye, but there was nothing there when you turned to face it? In our visual sense, the rods (outer sides) of our eyes are much more sensitive than the cones (center), thus able to pick up these fleeting impressions.

The more common non-physical form is often experienced as a picture in the mind's eye or as an image projected on the back of the eyelids. It is every bit as valid as physical visions and in some cases is more useful to experienced clairvoyants.

Discover how our psychics apply their gifts every day to help people face life's most challenging issues. Call a MostGifted clairvoyant today for an experience that's out of this world: 1-800-604-9505 or order online. 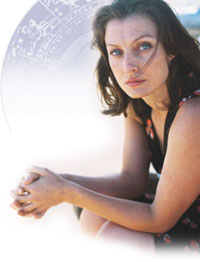 Can the spirit world help me?
Can I reach my loved ones?